In one of comedian Bob Newhart’s routines, he talks about beginning a new job. There’s always an orientation of some sort, but the first thing that comes up was never covered in the manual. He imagines the first day on the job for a security guard at the Empire State Building as King Kong is climbing up carrying Fay Wray. Rabbis don’t usually have to deal with apes climbing buildings, but as much as we study in rabbinical school, it’s not until we join a congregation that the real learning begins.

I’ve learned about the greater Malverne community, about the people who make up our congregation, and about myself. While we may not have increased our numbers this year, the level of engagement by those who are already part of MJC has increased, and I want to thank you for your support; for coming to services and programs, for bringing friends, and for stepping up to offer hands-on assistance to make things happen.

On Thursday, July 14, MJC kicked off its “Life Matters” initiative with a talk by Rabbi Richard Address of Jewish Sacred Aging, who spoke about how our texts and traditions can help us meet the challenges of the second half of our lives.

We had close to 60 people in the room, and more than half were not MJC members. The brief article on the Faith page in Newsday was a big help, and I also appreciate the efforts of everyone who invited friends and who helped with all aspects of the evening and the tasks leading up to it.

On Wednesday, August 17, we’ll have the next program, which shows us how both Torah text and a modern sitcom can help us have the difficult family conversations we’d rather avoid. If you have thoughts for future programs and activities, please let me know.

On a personal note, I joined MJC at the same time my mother was diagnosed with the aggressive cancer that would take her life six months later. There really are no words to say thank you for the wisdom, support and understanding you offered me during this very trying time, other than to say, “thank you.”

This has been a great year, together we can make next year even better! 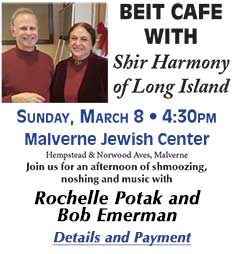