Leviticus 25:1 – 26:2
This translation was taken from the JPS Tanakh

Chapter 25
1 The Lord spoke to Moses on Mount Sinai: 2 Speak to the Israelite people and say to them:

When you enter the land that I assign to you, the land shall observe a sabbath of the Lord. 3 Six years you may sow your field and six years you may prune your vineyard and gather in the yield. 4 But in the seventh year the land shall have a sabbath of complete rest, a sabbath of the Lord: you shall not sow your field or prune your vineyard. 5 You shall not reap the aftergrowth of your harvest or gather the grapes of your untrimmed vines; it shall be a year of complete rest for the land. 6 But you may eat whatever the land during its sabbath will produce — you, your male and female slaves, the hired and bound laborers who live with you, 7 and your cattle and the beasts in your land may eat all its yield.

8 You shall count off seven weeks of years — seven times seven years — so that the period of seven weeks of years gives you a total of forty-nine years. 9 Then you shall sound the horn loud; in the seventh month, on the tenth day of the month — the Day of Atonement — you shall have the horn sounded throughout your land 10 and you shall hallow the fiftieth year. You shall proclaim release throughout the land for all its inhabitants. It shall be a jubilee for you: each of you shall return to his holding and each of you shall return to his family. 11 That fiftieth year shall be a jubileefor you: youshall not sow, neither shall you reap the aftergrowth or harvest the untrimmed vines, 12 for it is a jubilee. It shall be holy to you: you may only eat the growth direct from the field.

13 In this year of jubilee, each of you shall return to his holding. 14 When you sell property to your neighbor, or buy any from your neighbor, you shall not wrong one another. 15 In buying from your neighbor, you shall deduct only for the number of years since the jubilee; and in selling to you, he shall charge you only for the remaining crop years: 16 the more such years, the higher the price you pay; the fewer such years, the lower the price; for what he is selling you is a number of harvests. 17 Do not wrong one another, but fear your God; for I the Lord am your God.

18 You shall observe My laws and faithfully keep My rules, that you may live upon the land in security; 19 the land shall yield its fruit and you shall eat your fill, and you shall live upon it in security. 20 And should you ask, “What are we to eat in the seventh year, if we may neither sow nor gather in our crops?” 21 I will ordain My blessing for you in the sixth year, so that it shall yield a crop sufficient for three years. 22 When you sow in the eighth year, you will still be eating old grain of that crop; you will be eating the old until the ninth year, until its crops come in.

23 But the land must not be sold beyond reclaim, for the land is Mine; you are but strangers resident with Me. 24 Throughout the land that you hold, you must provide for the redemption of the land.

25 If your kinsman is in straits and has to sell part of his holding, his nearest redeemer shall come and redeem what his kinsman has sold. 26 If a man has no one to redeem for him, but prospers and acquires enough to redeem with, 27 he shall compute the years since its sale, refund the difference to the man to whom he sold it, and return to his holding. 28 If he lacks sufficient means to recover it, what he sold shall remain with the purchaser until the jubilee; in the jubilee year it shall be released, and he shall return to his holding.

29 If a man sells a dwelling house in a walled city, it may be redeemed until a year has elapsed since its sale; the redemption period shall be a year. 30 If it is not redeemed before a full year has elapsed, the house in the walled city shall pass to the purchaser beyond reclaim throughout the ages; it shall not be released in the jubilee. 31 But houses in villages that have no encircling walls shall be classed as open country: they may be redeemed, and they shall be released through the jubilee. 32 As for the cities of the Levites, the houses in the cities they hold — the Levites shall forever have the right of redemption. 33 Such property as may be redeemed from the Levites — houses sold in a city they hold — shall be released through the jubilee; for the houses in the cities of the Levites are their holding among the Israelites. 34 But the unenclosed land about their cities cannot be sold, for that is their holding for all time.

35 If your kinsman, being in straits, comes under your authority, and you hold him as though a resident alien, let him live by your side: 36 do not exact from him advance or accrued interest, but fear your God. Let him live by your side as your kinsman. 37 Do not lend him your money at advance interest, or give him your food at accrued interest. 38 I the Lord am your God, who brought you out of the land of Egypt, to give you the land of Canaan, to be your God.

39 If your kinsman under you continues in straits and must give himself over to you, do not subject him to the treatment of a slave. 40 He shall remain with you as a hired or bound laborer; he shall serve with you only until the jubilee year. 41 Then he and his children with him shall be free of your authority; he shall go back to his family and return to his ancestral holding. — 42 For they are My servants, whom I freed from the land of Egypt; they may not give themselves over into servitude. — 43 You shall not rule over him ruthlessly; you shall fear your God. 44 Such male and female slaves as you may have — it is from the nations round about you that you may acquire male and female slaves. 45 You may also buy them from among the children of aliens resident among you, or from their families that are among you, whom they begot in your land. These shall become your property: 46 you may keep them as a possession for your children after you, for them to inherit as property for all time. Such you may treat as slaves. But as for your Israelite kinsmen, no one shall rule ruthlessly over the other.

47 If a resident alien among you has prospered, and your kinsman being in straits, comes under his authority and gives himself over to the resident alien among you, or to an offshoot of an alien’s family, 48 he shall have the right of redemption even after he has given himself over. One of his kinsmen shall redeem him, 49 or his uncle or his uncle’s son shall redeem him, or anyone of his family who is of his own flesh shall redeem him; or, if he prospers, he may redeem himself. 50 He shall compute with his purchaser the total from the year he gave himself over to him until the jubilee year; the price of his sale shall be applied to the number of years, as though it were for a term as a hired laborer under the other’s authority. 51 If many years remain, he shall pay back for his redemption in proportion to his purchase price; 52 and if few years remain until the jubilee year, he shall so compute: he shall make payment for his redemption according to the years involved. 53 He shall be under his authority as a laborer hired by the year; he shall not rule ruthlessly over him in your sight. 54 If he has not been redeemed in any of those ways, he and his children with him shall go free in the jubilee year. 55 For it is to Me that the Israelites are servants: they are My servants, whom I freed from the land of Egypt, I the Lord your God.

Chapter 26
1 You shall not make idols for yourselves, or set up for yourselves carved images or pillars, or place figured stones in your land to worship upon, for I the Lord am your God. 2 You shall keep My sabbaths and venerate My sanctuary, Mine, the Lord’s. 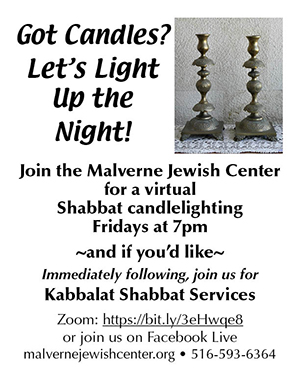 Download the Sim Shalom siddur for festivals and Shabbat:"
https://www.rabbinicalassembly.org/form/form-to-download-pesah-resources/confirmation?token=R-H1CEj7kctaZBcDKbX9_qoEAcvjVmu6nxLlHXbAfBg

THE OFFICE IS CLOSED:

JOIN THE CONVERSATION
MJC BLOG
THE BLESSINGS OF NAMES