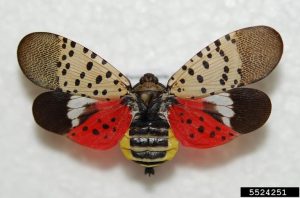 The spotted lantern fly has arrived in our area, and we’re being advised to squash them if we see them. This bug has no natural predators in the US, and is causing destruction to both fruit and ornamental trees, and potentially devastating area forests and orchards. There seems to be no question that aggressive management and destruction of this highly invasive species is needed, but at least one opinion, published in the Forward, disagrees. It fits in beautifully with this week’s Torah reading, Shofetim. A shofet is a judge, so Shofetim means, “judges,” and the parashah deals with issues of jurisprudence and social ethics. It also provides guidelines for the behavior of law courts, community elders, kings, prophets, priests and even offers a biblical form of the Geneva Convention, setting out rules with respect to warfare.

Much of this is intuitive and makes complete sense, but when we think of wartime, we think of the saying that “everything’s fair in love and war.” Apparently not. The Torah doesn’t speak about love, but it does speak about how the Israelites, and we by extension, are to treat our enemies during war. It also lays out rules for the care and preservation of the environment during these times and introduces the principle of bal taschit, which means, “do not destroy,” and refers to indiscriminate destruction. Specifically, the Torah tells us that when we besiege a city in war, we are not allowed to cut down the fruit trees. This is then extended in the Talmud, which says, in tractate Kedushin, “Whoever breaks vessels, or tears garments, or destroys a building, or clogs a well, or does away with food in a destructive manner violates the negative mitzvah of bat taschit. In Maimonides’ Mishneh Torah, under Laws of Kings and Warfare, he adds that a person guilty of bal tashcit would incur the penalty of flogging. However, if the tree or other object is more likely to cause damage to a person or property, it is permissible to destroy it.

Rabbi Neal Loevenger, who has a Master’s degree in environmental science, has written extensively about this, and in a d’var Torah on My Jewish Learning dot com, brings in further explication from Sefer HaChinuch, which is a 13th century explanation and discussion of each of the 613 commandments. In it, the anonymous author finds an even deeper teaching embedded in the principle of bal taschit. He (I assume it’s a he) wrote that the purpose of the mitzvah of bal tashchit is to teach us to love that which is good and worthwhile and to cling to it, so that good becomes a part of us and we will avoid all that is evil and destructive. Rabbi Loevenger says that, “According to this interpretation, acting to safeguard the beauty and abundance of the world is a measure of our appreciation of it. Inculcating a consciousness of our behavior is at the core of Judaism, as the teachings pertaining to sacred time and moral rigor might suggest. Bal taschit asks us to apply that same conscientiousness to the ecological consequences of our everyday actions; perhaps that kind of consciousness is an essential part of “righteousness” for our times.”

Do I recommend squashing the spotted lantern fly if you see it? First, yuk. Second, I’m a rabbi, not an environmental scientist, so I defer to the experts. As long as people travel from one place to another, and winds blow across seas and continents, we’ll always have to deal with invasive species, and Nature has a way of taking care of itself. May we be blessed to live in harmony with Nature and each other.