Ki Tavo: What Are We Really Afraid Of? 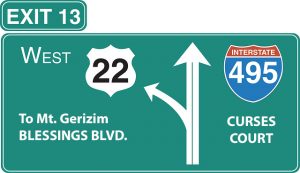 In this week’s Torah reading, Ki Tavo, we have what’s called the Tochecha, the curses or the rebukes; essentially, the terrible things that will happen if the Israelites, once settled in the Promised Land, don’t follow God’s commandments. Since they’re supposed to be read quickly and in an undertone, I’m not going to enumerate any of them here, but they’re things you probably wouldn’t wish on your worst enemy.

Luckily, the reading also includes the blessings that the people will receive if they do follow the commandments. Moses tells the people that half of the tribes will stand on Mount Gerizim, where the blessings would be spoken, and the other half would stand on Mount Ebal and for the curses. The Levites would then would call out the list of actions and behaviors that would cause a person to be cursed if they engaged in them; worshipping idols, engaging in inappropriate sexual relationships, insulting one’s parents. And the people would reply, Amen.

Then interestingly, it appears to be Moses himself who tells the people how they will be blessed if they follow the Instruction (Torah) that is being given to them. Then, it’s Moses, not a Levite or a Kohen or a tribal leader, who continues with the consequences for failure to observe the commandments.

The way the Torah reading is arranged, the Levites first pronounce the things that will bring curse. Then the people are blessed, and finally, told what terrible, horrible, no good, very bad things will happen if they don’t obey.

But rather than look at these curses as a sign of Divine punishment for going astray, can we imagine that they’re the collective fears in general of the people living at that time? Things that they’re worried will happen because of their actions? Or, that they’ve already happened? Is it possible that by blaming these curses on “sin” that our ancient ancestors could make sense of the tragic and traumatic things that happen in the world and in their lives?

How can we look at these “curses” through our modern lenses?