Don’t Be A Slave To The Text! 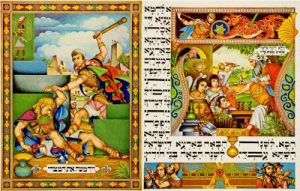 A Page from The Arthur Szyk Haggadah

If you go to the terrific website, haggadot.com, you can download and customize hundreds of Haggadot for use at your seder, or just for fun. There’s a Schitt’s Creek Haggadah, a 10-Minute Dayenu Seder for use with young children, coloring pages and yes, traditional text.

If you grew up like I did, you had a “standard” traditional Haggadah; perhaps Maxwell House, perhaps the one with the red, black and yellow cover. And if you were at our seder, everyone had a different edition of that standard.

Times have changed, Baruch Hashem! We no longer have to be slaves to the text! To be honest, we never had to be, but growing up, no one told me that. I assumed the whole text was printed somewhere in the Torah, and that there was a “right way” to do the seder.

How liberating is it to realize that Rabbi House, and even Mrs. Maisel’s pink-covered edition (with her brisket recipe), aren’t carved in stone! When we realize that the Haggadah (from l’hageed, “to tell”) should be a jumping-off point for discussion and introspection, we’re upholding a centuries-old tradition of telling the story of Yetziat Mitzrayim, the “Going Out of Egypt,” in a way that makes sense to us for the times we’re living in.

The underpinnings of the seder are in the Mishna in Tractate Pesachim, which we just completed reading in daf yomi, but it wasn’t until a few hundred years later, in the 9th century, when Rav Amram Gaon codified an actual Haggadah. What did the Jewish people do during that time? We reclined and ate and told the story. We invited the children (and others) to ask questions, and we had a few questions in our back pocket if no one did.

The story of the Israelites’ descent to the land of Egypt, which happens when Joseph’s family traveled to buy grain during the famine and ultimately settled there, and our redemption by God 400 years later, is a story that continues to repeat itself. Through no fault of their own, people descend into poverty and homelessness. Refugees are still fleeing from persecution, war and famine. Human trafficking and slavery still exist, food insecurity is rampant all over the world, and so many in the LGBTQ and BIPOC community live in fear of racism.

The story of Yetziat Mitzrayim hasn’t changed, but we have, and each year we change a little more. How will you tell the story this year?