Dissenting: SCOTUS and the Talmud 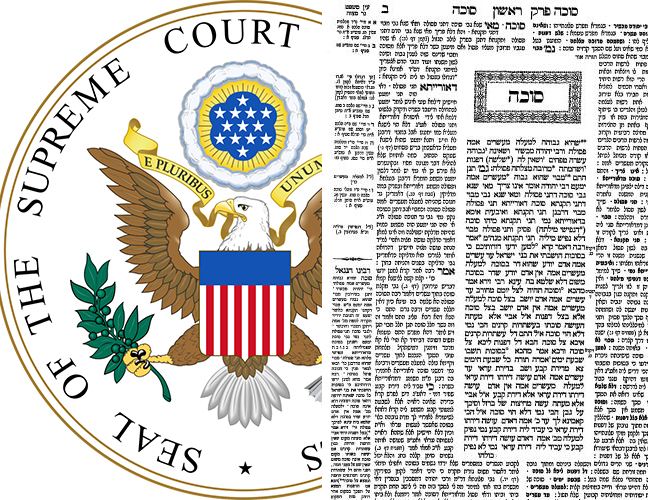 The seal of the US Supreme Court and a Talmud page

On January 5th, I marked one year of Daf Yomi, the practice of studying one page of Talmud per day, every day. Now before you get overly impressed, keep in mind that I often read the page in English, or the summary from My Jewish Learning. Some days I get behind and have to catch up, but there are no daf yomi police that I know of.

Looking at some of the discussions, it’s easy to imagine that the rabbis mentioned in the Talmud had nothing better to do all day than discuss minute details regarding seemingly obscure concepts and practices. I don’t really care if a lizard in my oven will render it ritually impure; if there’s a lizard in my oven, I’m not using it! I might even have to sell my house.

What I do care about is the rabbis’ thought process; how did they make sense of the world around them within the context of Torah and other sacred writings? What did they do when they disagreed (always) and what happened when one position was adopted over another? Or when there was no conclusion?

The Talmud contains a record of these discussions, disagreements, precedents, teachings from earlier rabbis and sources, stories, historical information and much more. What might be most fascinating is that fact that when one rabbi’s ruling is adopted, the opinion of the one(s) who disagreed, along with the whole discussion leading up to the conclusion, is recorded as well.

Each voice is considered vital to the conversation.

If we were privy to the deliberations of the US Supreme Court, we might wonder if they’re studying Talmud; arguing over details and generalities, questioning whether or not a precedent really applies to the case at hand, and perhaps even going off on a tangent or two.

When the US Supreme Court hands down decisions, it also records the dissenting opinion, and I’m convinced this is based on the structure of the Talmud. I’d like to believe that just like the Talmud, SCOTUS Justices carefully consider facts, precedents, extenuating circumstances and other similar situations when coming to a decision.

In both cases, we might wonder– why do we waste ink on what was rejected? Isn’t the decision all we need? Not in the Talmud, and not in the Court. One reason is to make sure that the reasons for the dissenting opinion are recorded, because they may affect judgments in future, similar cases. Another is that the dissenting opinion can help the person writing the majority opinion to further clarify their position, as was the case with the late justices Ginsburg and Scalia. Finally, it again reminds us that while we may not agree, and “our side” may not ultimately prevail, everyone has a right to an opinion, and a right to be heard.

There’s a lot of turmoil and division in our country at the moment, and everyone wants to be right, for their opinions to be the only ones considered. As S. G. Tallentyre wrote in her biography of Voltaire, “I disapprove of what you say, but I will defend to the death your right to say it.” And I will do my best to listen and to hear.