Hayom Harat Olam, the Birth-day of the World 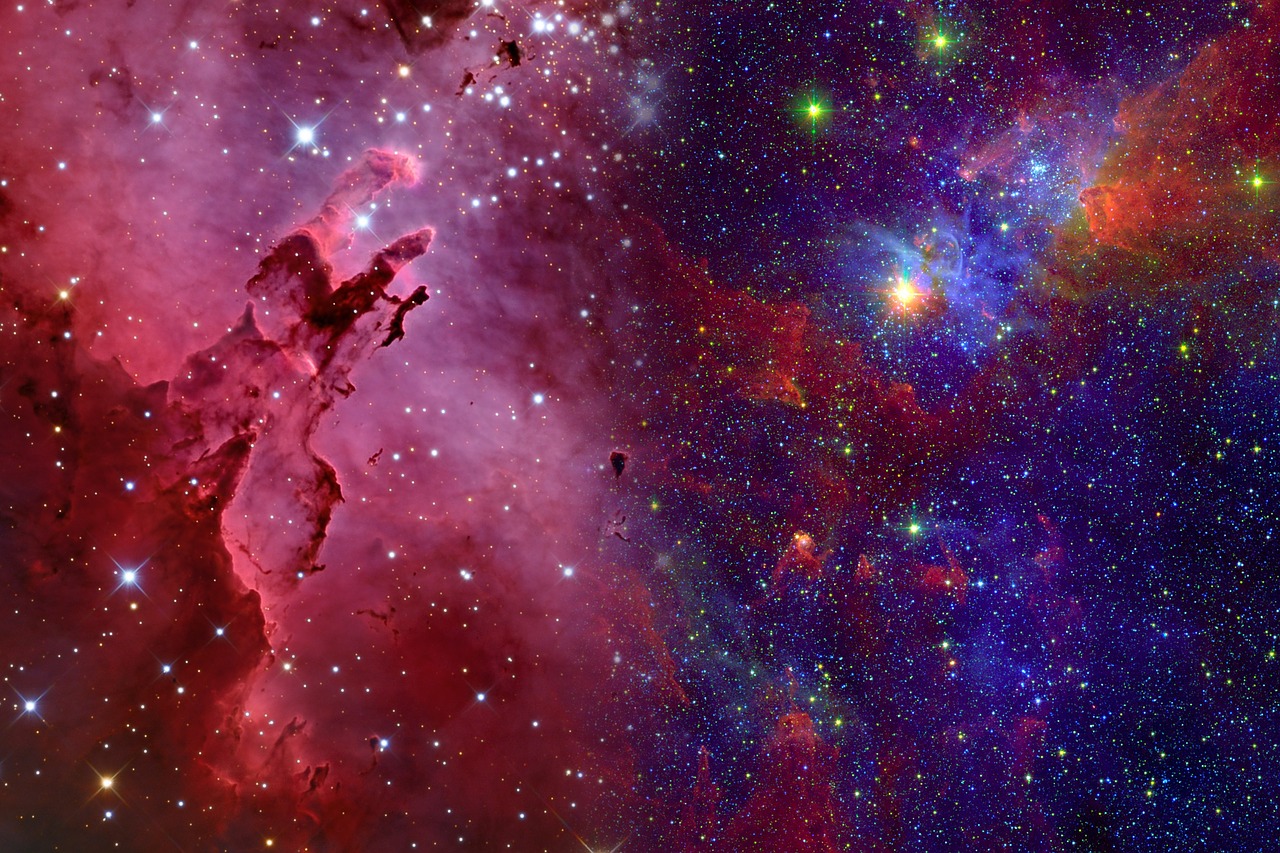 The universe was wilde and waste…

After each of the sets of shofar blasts in our upcoming Musaf service, we’ll proclaim, Hayom Harat Olam! “Today is the birthday of the world.” It’s a very curious phrase, and the literal translation is, “today the world is pregnant–or gestating.”

Where does this come from? In the Torah, Rosh Hashanah isn’t even called the new year, let along the birthday of the world!

Well, there’s a discussion in the Talmud about blowing the shofar during the Jubilee year, and Rav Shmuel bar Yitzchak, asks, “In accordance with whose opinion do we pray today on Rosh Hashanah, saying: Zeh hayom t’khilat ma-asekha, zikhron l’yom rishon, ‘This day is the beginning of Your works, a commemoration of the first day?’” And the reply is, “In accordance with the opinion of Rabbi Eliezer, who said: ba tishrei nivrah ha olam, ‘The world was created in the month of Tishrei.’ We therefore mention on Rosh Hashanah, that it is the first day.”

Here, it would seem, the rabbis connected a human birthday, which is a person’s first day in the world outside of the womb, with God’s Creation of the universe.

Then what does it mean for the world to be pregnant? It could mean that the earth and everything that exists in it are always creating and bringing forth new life, but I’d like to look at hayom harat olam as “today–this day–is pregnant with possibility.” Life is full of possibilities and potential already existing in each and every one of us–waiting be tapped into–just as God created order out of chaos; separating the light from the dark and the heavens from the earth.

Nowhere in the text do we read that God said, “Ok angels, stand and back and watch me do this!” or “Tada!” While there’s no question that God is the force behind what’s coming forth from the earth and water, the generative power was given over to nature, and nature has to take its course. That said, God does stand back, survey each day’s creation, and say, ki tov, “it’s good.”

Finally, on Day 6, after consulting with the heavenly host, which we assume are the angelic beings, God does actually create a human, male and female, although we don’t learn how this happens until Chapter 2. There we read that Adam was formed from the dust of the earth, and that God gave the human nishmat chayim, the breath of life, by blowing into their nostrils. With that life-breath God also gave humanity free will, as well as the potential for positive living and not-so-positive living. Humanity is also given the mandate to both have dominion over the earth–and to be its caretaker–and the creativity and intellect to figure out how.

In our Musaf service, after each set of shofar blasts, we sing “Areshet Sifateinu,” asking that our prayers be pleasing to God. Makes perfect sense. And then we exclaim Hayom Harat Olam, and continue by saying, “On this day all the world’s creatures stand before you in judgment.” The entire world–all of God’s creations, animal, mineral and vegetable–are being judged, and everyone and everything wants to be judged with love and compassion.

The good news is, God is a much more lenient judge than any human. And being judgmental isn’t necessarily a bad thing; we do it all the time and sometimes it can keep us out of serious trouble. Sometimes it gets us into trouble. Some people are quick to judge, others want to gather more facts before they pass judgment.

I think our ability to make good judgments increases as we get older–after all–we have a lifetime of experience in making good calls and bad calls, and dealing with the consequences. We often become more discerning as we age, and we’re better at letting certain things go. Unfortunately, when we’re reminded that life is short, we begin to judge ourselves more harshly than we would ever judge another person, and certainly more than God would judge us.

I recently read a book called,

The End of Old Age

, by Dr. Marc Agronin, a geriatric psychiatrist in Miami, Florida. When I told people the name of the book, the joke was, “we know what the end of old age is, death.” God willing, we should all be well and live to and through old age, whatever that is. Dr. Agronin’s book challenges us to think about the aging process, and our own aging, in a different, and much more positive way.

There’s no question that our bodies and our brains change as we get older. It takes longer to complete many of the physical tasks we used to rush through. As Bob Rivers’ parody of the song by Kiss goes, “I used to rock and roll all night, but now my hair’s turning gray, I’ve got to get to bed by 9, rub on a tube of Ben Gay…” Ok, maybe it’s not quite like that, but I do know that unlike in my 20s I can’t stay up until 2am and be on my way to work at 7. And when I go to the gym, I’ve stopped trying to keep up with the instructor or be the first one up the hill on a hike. I’ve learned to respect my body and its limits.

Usually, when we think about aging, we think about deficits. We focus on the things we can’t do that we used to do, how foods we’ve always loved have turned on us, how we need more vitamins and medications to keep things moving, literally and figuratively. We imagine a slow decline that might end in decrepitude and infirmity, and with a mind afflicted by memory loss and dementia. And this does happen, but it’s only half the story.

Dr. Agronin describes how the aging process itself grants a variety of strengths through the ongoing growth and development of our experience, knowledge and skills, and their integration over time. As a result, we gain greater wisdom, deeper purpose and heightened creativity because of age. These factors must be seen as a counterbalance to the decline perspective. Essentially, aging brings strength.

Perhaps not the strength of people like Sister Madonna Buder, who at 88 is known as the “Iron Nun.” She’s the oldest person to ever finish an Ironman Triathlon in under the 17-hour time limit, and forced the Ironman organization to create new categories–the 75-79 and 80-84 age groups.
Or Yuichiro Miura, who at the age of 80, became the oldest person to summit Mount Everest. This was his third time climbing the world’s highest peak, and all three times were after age 70.

That won’t be me, not because I don’t think I could, but because it’s not the way I want to spend my time. However, if God blesses me and I take good care of myself, then at least theoretically, I can stay active and doing things I enjoy for many, many years to come. And, I take inspiration from Supreme Court Justice Ruth Bader Ginsburg, who at the age of 85 is still working out with a trainer and doing demanding TRX workouts.

So how does age bring strength? According to Dr. Agronin, it means “we must recognize the immense potential of our aging self, even in the face of common and expected struggles. We must learn how to age in a creative manner that is both the antidote to feeling old and the elixir of aging well.”

How does this fit in with today, Rosh Hashanah, the idea of hayom harat olam, that today the world is pregnant, or gestating? Well, if we can change the way we view getting older, then we can change some of the ways we view the whole concept of teshuva on Rosh Hashanah. Perhaps it’s less about what we did last year that we want to change, or do differently, but about reorienting our thought processes surrounding aging, especially our own.

Yes, we want to be written and ultimately sealed in the Book of Life for life and blessing, and our thoughts and prayers today and tomorrow, and through Yom Kippur, are directed towards acknowledging any wrongs we may have done, and doing our best to right them in the coming year. But let’s also think about the potential incubating in ourselves, and the possibilities for our futures. How do we see the future? How do we develop the skills, abilities and knowledge to see strengths in ourselves that we might not have seen before, the strengths that are already within us?
How do we develop an appreciation for those strengths, and give birth to a positive future? In Dr. Agronin’s words, we need to let go of the tired and constricted notions of ‘old’ that we internalize throughout our lifetime and that serve to denigrate and limit our aging self and perpetuate an ageist culture. This–itself–is a form of teshuva.

Hayom Harat Olam, today, let’s embrace the process of creating possibilities for the future; for ourselves, for our communities, and for the world. As we imagine being written in the Book of Life, let’s remember that each of us is God’s co-author. What will your next chapter be?