Enchantment, the Talmud and Memory 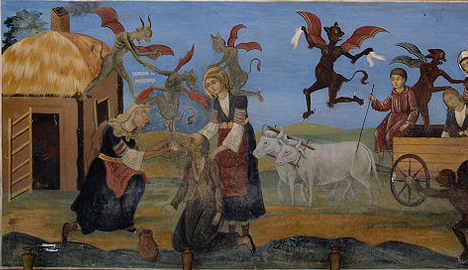 When I was a teenager, I loved going to Rabbi Wallin’s Tuesday evening Talmud class. I can’t tell you anything that I learned all those years ago, but I fell in love with Talmud, the sing-song voice in which it was often read, and the interesting explanations and discussions that it contained.

Award-winning author, Maggie Anton, fell in love with Talmud as an adult after taking a class. You might recognize her name as the author of the Rashi’s Daughters trilogy, as well as a book called Fifty Shades of Talmud. She also wrote two books about a woman who is mentioned very often in the Talmud, known only as bat Rav Hisda, the daughter of Rav Hisda, who was a Talmudic sage and head of a yeshiva in 4th century Babylonia. Anton’s inspiration came from reading a story in the Talmud about how Rav Hisda’s daughter would sit on her father’s lap when he taught his students, and as a result, became a knowledgeable sage in her own right.

The story comes from the tractate Bava Batra, in a discussion about prophecy. It states that following the destruction of the Holy Temple in Jerusalem, only fools and children had the gift of prophecy, and to support that statement, brings in the following story: “It was like this incident involving the daughter of Rav Ḥisda, who when she was a child, was sitting on her father’s lap while he sat and learned. Rava and Rami bar Ḥama were sitting before him. Rav Ḥisda jokingly said to his daughter: Which of them would you want to marry? She said: both of them. Rava said: And I will be last. And this is what happened; first she married Rami bar Ḥama, and when he died she married Rava.”

The way I understand this story, Rav Hisda’s daughter’ gift of prophecy was evident at a very young age.

According to these historical novels, Rav Hisda’s daughter was not only very learned in texts and halakha, but was an enchantress as well, which isn’t surprising, given that Ancient Babylonia had a long, prevalent and generally accepted practice of magic. She was able to conjure up demons and protect people from them, and was often commissioned to write incantation bowls and amulets for people both in Babylonia and the Land of Israel.

While I was reading the second book about her, “The Enchantress”, I was also studying Talmud with a partner, and we read a fascinating story brought in to prove a point; that the dead know what’s going on in the world of the living, and that the living and the dead are able to interact.

And the story is told (Berakhot 18b): A pious man gave a poor man a dinar on Erev Rosh Hashanah during a drought year, and his wife mocked him for giving so large a sum at so difficult a time. In order to escape her, he went and slept in the cemetery. That night in his dream, he heard two female spirits conversing with each other.

One said to the other: “My friend, let us roam the world and hear from behind the heavenly curtain–which separates the Divine Presence from the world–what calamity will befall the world.”

The other spirit said to her: “I cannot go with you, as I am buried in a mat of reeds, but you go, and tell me what you hear.”

The first spirit went and roamed, and returned. The second spirit said: “My friend, what did you hear from behind the heavenly curtain?”

She replied: “I heard that anyone who sows during the first rainy season of this year, hail will fall and strike his crops.”

Hearing this, the pious man went and sowed his seeds during the second rainy season. Ultimately, the crops of the entire world were stricken by hail but his crops were not stricken.

The following year, on Erev Rosh Hashana, the same man went and slept in the cemetery at his own initiative, and again heard the two spirits conversing.

“Let us roam the world and hear from behind the heavenly curtain what calamity will befall the world.”

“My friend, have I not already told you that I cannot, as I am buried in a mat of reeds? Rather, you go, and tell me what you hear.”

She went, and roamed, and returned.

“My friend, what did you hear from behind the curtain?”

“I heard that those who sow during the second rainy season, blight will strike his crops.”

This sounds like getting the results at Belmont or Aqueduct the day before the races!

Well, guess what happened the following year? He went and slept in the cemetery, and heard the same spirits conversing with each other.

“My friend, let us roam the world and hear from behind the heavenly curtain what calamity will befall the world.”

The second spirit said, “My friend, leave me alone, as words that we have privately exchanged between us have already been heard among the living.”

The Talmud’s conclusion, at least at this point in the discussion, is that apparently, the dead know what transpires in the world of the living. It also means that the living and the dead can communicate, which some of us may have experienced ourselves in a variety of ways. For example, my daughter is convinced that my mother, whose condo she lives in, has pushed the cats off of the kitchen counter. While she has always had a very creative imagination, I’m not about say it didn’t happen, because who knows?

Judaism has a long tradition of asking the dead to intercede with God on behalf of the living, and for what’s called zechut avot, the merit of our ancestors. “God, I understand you may not grant my prayer based on my merit, but do it for the sake of those who came before me, certainly they merit your grace.” And if we’re not so sure our personal ancestry will do the trick, we invoke Abraham, Isaac and Jacob, Sarah, Rivka Rachel and Leah, the matriarchs and patriarchs, as we do at the beginning of every Amidah.

Torah very clearly prohibits the summoning up the spirit of a deceased person, but we know from the story of King Saul, when he visited the Witch of Endor asking to speak with the dead prophet Samuel, that this practice at least happened once. In Ancient Babylonia, highly educated people believed that disease and injuries were caused by demons and the Evil Eye, and that magic was real and effective. The rabbis found ways around the prohibition of practicing magic, especially when it came to p’kuach nefesh, preserving a life.

In The Enchantress, more than once Rav Hisda’s daughter and her second husband, Rava, visit the cemetery on Erev Rosh Hashanah to speak to their parents, because on this evening, the pargod, the curtain between the living and the dead, is most permeable, which makes the timing in the Talmud’s story quite fortuitous.

I’m not suggesting that we all go running down to Wellwood or Beth David or New Montefiore after services this evening, but I’m willing to bet that we all have people who have left their earthly lives, from whom we could really use some advice, some support, or just a listening ear. Both God, and the souls and spirits of our departed loved ones are ethereal, like air, but are always near to us when we call–and even when we don’t–and we can encounter them anywhere and anytime.

Maimonides teaches that the Yamim Noraim, the Days of Awe which begin this evening and go through Yom Kippur, are a time when the boundaries between heaven and earth are more permeable, when we’re closer to God and the Holy Blessed One is even more attuned to us and to our prayers. Perhaps this is where the idea of a permeable border between the living and the deceased comes from.

During this season of teshuva, of examining our deeds and reorienting ourselves in the coming year, may the memories of our loved ones continue to inspire us.

Shana tova u m’tuka, may you have a happy, healthy and sweet new year.