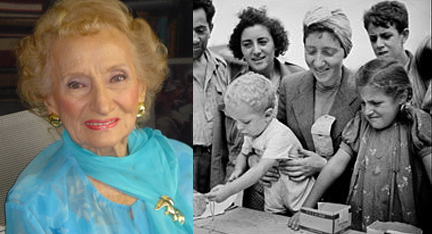 “Ruth Gruber has moved across most of the twentieth century as a compassionate writer, eloquent speaker, humanitarian and rescuer of Jews.”
Barbara Seaman, Jewish Women’s Archive

Three years ago, at a Kristallnacht program, I had an opportunity to hear her speak and to see a documentary about her life and work called “Ahead of Time.” There’s no question that Ruth Gruber was ahead of her time both personally and professionally. While she may be best known because of her connection with the Fort Ontario project in Oswego, NY, her decades-spanning career took her all over the world, and her integrity as a journalist allowed her to witness some of the pivotal events of modern times.

Her willingness to take risks, to put herself in the center of the action, and to not back down from challenges served her well–whether she was interviewing a mayor in the Soviet Arctic, hosting formal dinners at the governor’s residence in Alaska, or taking the forbidden photos aboard the ship “Exodus 1947” which shocked the world into action following the Holocaust.

Ruth also had a knack for asking the right questions and an ability to almost immediately put her subjects at ease. She was intelligent, confident and creative, traits that gained her access to people and events that put her more seasoned, male colleagues in awe of her.

In the forward to “Witness,” a photo essay of Ruth’s work, Richard Holbrooke commented that “Her articles changed her more than they changed the gulag or her readers; they unleashed her lifelong concern for the oppressed, the voiceless, the homeless.” In her talk, Ruth said that she learned to be a compass, and tried to understand those about whom she was reporting.

Ruth Gruber was born on September 30, 1911, in Brooklyn, NY. She graduated from NYU at 15 and in 1930 received her M.A. in German and English literature from the University of Wisconsin. She received a fellowship at the Institute of International Education for study in Cologne, Germany, and following its completion, one of her professors asked her to stay on and study for a PhD analyzing the writings of Virginia Woolf. At the age of 20 the New York Times reported that Ruth had become the youngest person in the world to earn a Ph.D., and the first to focus on Woolf.

Being in Germany during Hitler’s rise to power gave Ruth an opportunity to hear him speak personally. As terrified as she was that she would be recognized as a Jew and killed, Ruth attended Nazi rallies and listened to Hitler’s rants against Americans and even more so against Jews. She understood very quickly that this was a person with whom the rest of the world would need to contend, and that his threats needed to be taken seriously.

Ruth returned home, and like many people during the Great Depression, was unable to find work. She began writing stories and submitting them to various publications, finally finding a home at the International Herald Tribune through owner and publisher Helen Rogers, who was also ahead of her time. Ruth said that when she brought her fiancé Phil to meet her, Reid said something to the effect of, “The Herald Tribune requires women who work for the paper to change their names when they get married. I think that’s wrong, don’t you?”

Ruth’s first major assignment from the Herald Tribune was to study and write about what was happening to women under the regimes of Hitler’s fascism, Stalin’s communism and European democracy. In the spring of 1941 she became Secretary of the Interior Harold Ickes’ special assistant to Alaska. When war broke out, she was instrumental in the resettlement of thousands of Aleuts from their islands, which were extremely vulnerable to Japanese attack, to the city of Juneau.

Ruth is best known as the “mother” of nearly 1,000 European refugees who came to the United States outside of quota limits–as guests of the President–to spend the duration of World War II in Fort Ontario, an abandoned Army camp in upstate New York.

When Ruth heard about the camp’s creation on the radio, she immediately went to Ickes and asked to be sent to Italy to accompany the refugees to New York. She understood that they would be frightened and unsure of what to expect, and that they would need someone to reassure them and hold their hands. She joined the refugees and the crew of the Henry Gibbons for their treacherous trip across the Atlantic.

When she wasn’t listening, writing and photographing on the ship, Ruth helped to maintain order and raise morale among the refugees and nearly the same number of wounded soldiers, with whom Ruth also spent time. She also set up makeshift classrooms on the ship and worked to teach English to as many of the refugees as possible, again demonstrating her versatility and down-to-earth personality.

When the war ended, Ruth and many others worked tirelessly to allow the refugees to apply for American citizenship. Many already had relatives in the US who were willing to vouch for them, and because of the devastation in Europe, many had no homes to go back to.

On December 23, 1945, President Truman announced on the radio that the refugees could stay. They were taken to Canada where they completed the required paperwork, and entered the US as immigrants. Ruth called this “A great thing for America.” Many of these new immigrants from went onto become distinguished individuals in a variety of fields, including a doctor who helped develop the CAT Scan.

Fast-forward to 1947, when the Haganah ship Exodus 1947 was trying to enter the Holy Land and was being attacked by the British. Ruth, who had been covering the proceeding of the UN Committee on Palestine, drove to Haifa and cover this new story. After several weeks of the passengers at sea and in port in France on other ships, Ruth was one of three reporters allowed to board one of the ships, Runnymede, where she interviewed the captain and many passengers.

She took photos of the living conditions and of a flag the refugees had created by painting a purple swastika on a Union Jack. That photo became Life Magazine’s Photo of the Week. When Ruth sent her film off to Eric Hawkins of the Paris Herald Tribune he told her the pictures had made him cry and said, “These pictures belong to the world. I gave them to the AP and they traveled around the world in eight minutes.” The attention Ruth’s photos brought to the plight of the refugees helped to sway opinion towards creating the modern state of Israel, and most of the passengers from the Exodus 1947 eventually did settle in Israel.

You can read more about Ruth Gruber and her life online and in many books, but what’s significant for today is the parallel between Ruth and our parasha today, Vayera, which begins with vayera alav ado-nai, “And God appeared to him” meaning Abraham, as he sat by his tent in the heat of day. God appeared in the form of three men, one of whom told Sarah that she would have a son, and she laughed. After all, they were both quite old by that time!

While Ruth’s career started in her 20s, she worked well into her later years, when most people would have retired. Abraham may have been the father of multitudes, while Ruth Gruber took the refugees and disadvantaged under her wing and challenged the world to act. May her memory be a blessing, and may we be inspired to listen to and hear the stories that are around us.